Those who know me know that I have a top 10 list of pet peeves.  It has also been referred to as the ‘never ever’ list.  Hovering around the number one position is the practice of placing tip jars on bars at events.

Some may argue that if the event has a cash bar (don’t get me started with that one) then it follows that bartenders should be allowed to accept tips from the guests.  However, if a client is paying for an open bar for their guests, the bartender should ‘never ever’ place a tip jar on the bar. 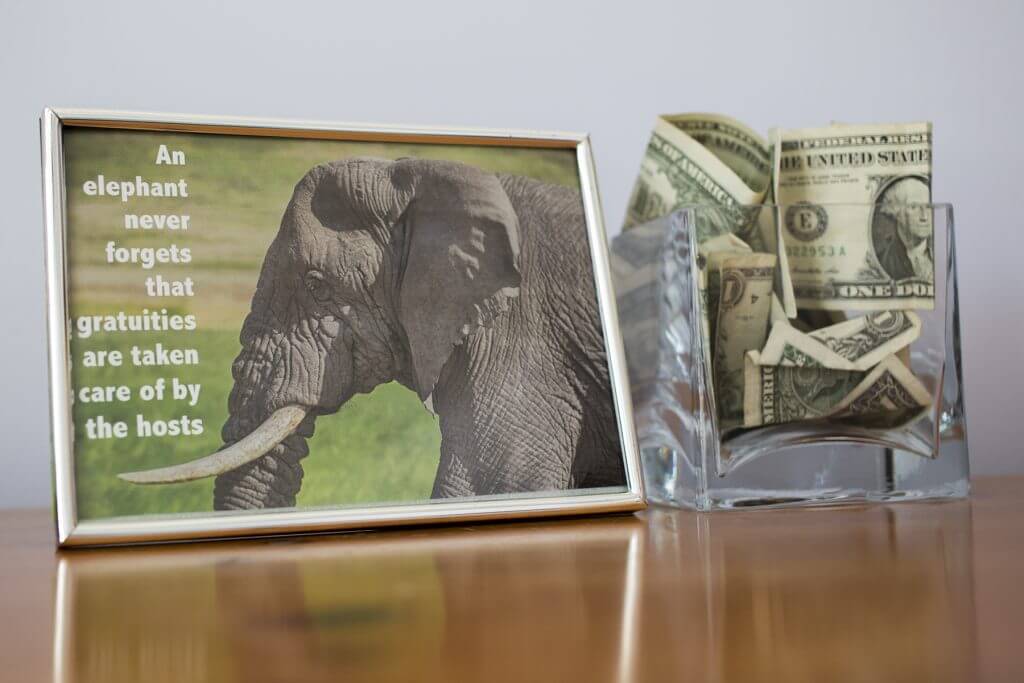 Venue contracts most often will include a line item indicating a specific service charge to be added to the final totals.  This can also be referred to as a house fee, administration fee or service fee and often ranges from 18% – 24%.  This percent is added to the food, beverage, room rentals or audio visual services secured for the event.  More and more venues are adding details regarding how they designate this charge.  For example, with a 23% service charge, they may delegate 8% to administrative costs and 15% for gratuities for the staff.

The policy of gratuities should always be discussed prior to signing any venue’s contract.  An important question would be to inquire about how the staff gratuities are handled.  Some venues will pool the amount and then distribute evenly among the event staff while others will give a larger percent to the wait staff and a smaller percent to the bartenders.  It is also a common practice to tack on an ‘attendant fee’ for the bartenders and coat room attendants at larger events.

Nothing irks me more than to see a tip jar on a bar when we have discussed this at length with a venue’s event team.  I can’t tell you how many times that I am told that it is the company’s policy to not allow tip jars yet the bartenders always seem to go rogue and place a dollar-filled jar smack in the middle of the bar.    During the final walk-around prior to an event, we find ourselves in a ‘battle of the bills’ with bartenders who insist on having a tip jar.

During one social event at a hotel, I walked by the coat room to find a tip jar out, overflowing with pre-placed dollar bills.  After tactfully asking the attendant to remove the jar, I continued to check the two bars positioned in the pre-function space.  As expected, tip jars were on both bars so I reminded the bartenders of the contract agreement as well as the hotel’s written policy.  No sooner had I walked into the ballroom to double check the tables, the bartenders defiantly replaced the tip jars onto the bars.  One of our alert event assistants, witnessing this transgression, informed the banquet manager to deal with the issue.

Certainly, should a guest kindly decide to offer a tip to a bartender, we always ask that the bartenders discretely slip the bills behind the bar so the other guests don’t feel obligated to follow suit.  We have also placed small framed signs on bars stating, “You’re hosts have kindly taken care of all gratuities this evening.”

During a recent wedding (with an open bar), we had a long discussion with the event manager regarding bartenders blatantly soliciting tips.  She adamantly stated that it is not allowed in the venue and that bartenders benefit from the shared gratuity pool after each event.  I mentioned that one of the bartenders had seen me prior to the event and he said, “Oh I remember you, you’re very particular.”

Several years prior, this same bartender had placed a tip jar on the bar and had fanned out numerous dollar bills across the top of the bar, as if to say, “keep it coming folks!” Tacky to the nth degree!  He was quickly admonished by myself as well as the event manager and I even recalled this incident during my pre-event discussion.  Wouldn’t you know it, as soon as the bars were rolled into the ballroom, both bartenders immediately placed tip jars (stuffed with dollar bills no less) out in plain sight.  With my blood boiling, I swiftly removed the tip jars and went to find the event manager.  As I walked away, one of the bartenders (guess who?), took out a wad of cash and fanned it out on the bar.  Really??!!

We often must walk a fine line when managing an event for a client.  We need to be respectful of the venue’s event manager and understand that the bartenders are their employees.  However, signed contracts are legal documents that should be respectfully followed by all the venue’s employees.  Despite our best efforts, it is exceedingly annoying to deal with this time and time again.  I often wonder if the event managers look the other way to compensate for the low hourly wages paid to their employees?  Even if this is the case, that’s not our client’s issue and signed contracts should be followed to the letter.

Historically, people are under the impression that if they generously tip a bartender, their drinks will be more potent and the service more attentive.  This may be the case in restaurant bars, but at events, all guests should be treated equally and the service should always be top-notched.  You certainly don’t see servers walking around with money bags strapped to their waists, clanging coins while balancing their food trays!

Tip jars are an issue that won’t be going away any time soon.  This has become an item that is front and center during every event meeting and one of the tasks that is on our check list for every event.  It would certainly be helpful to have venue managers reiterate this policy during ‘recon’ meetings prior to events.  In addition, they should be mindful of ‘repeat offenders’ and deal with this accordingly.

In the meantime, whether you have an event planner or not, make sure to scrutinize contracts and add addendums if you don’t see your specific desires listed clearly – OPEN BAR, BAN THE JAR!!